How to overcome the challenges of EHR implementation

EHR implementations will always present some type of challenges, the size and impact of these challenges are largely in the hands of practices who, through planning and their responses to problems, can either avoid or mitigate the negative effects of these challenges. However, if appropriate measures are not taken to address these challenges, usual implementation difficulties, such as drops in revenue and productivity, can be compounded and snowball into much more serious and pervasive issues. One need only look at the various accounts of EHR failures which have severely impacted finances and care delivery in healthcare organizations. Although not all organizations will experience substantial EHR failures, the more common scenario involves less serious problems that arise from the numerous challenges that can appear during implementation.

Challenges related to EHR implementation can occur in a number of areas including problems related to training, buy-in among clinical staff, data sharing, and a lack of patient adoption. The challenges, if left unaddressed, can result in user dissatisfaction, reduced productivity, an overall lack of buy-in to organizational goals as they relate to the EHR system, and declines in patient satisfaction as well as the quality of care. Identifying and understanding how to overcome common challenges in EHR implementation is an important strategy to mitigate some of the common negative effects of the implementation process.

Check out our complete guide to EHR implementation success

The following provides an outline of the major challenges in EHR implementation and a discussion of strategies in overcoming some of the common problems.

Effectively training users prior to and during the implementation process is vital to minimizing challenges related to lost productivity and avoiding a situation in which users, due to a lack of proper training with an EHR, become dissatisfied and frustrated.

One of the most common training related problem an organization will encounter involves tailoring training content to a users’ current skill level and comfort with computers. Before developing a training curriculum, it is important to determine users’ level of advanced computer literacy. In this sense computer literacy as a concept would involve the level of skill a user’s computer skills beyond basic functions. If staff need additional training to develop more refined computer skills, then this may be necessary before engaging in training involving a new EHR. Even the most reluctant or technology-averse users can become comfortable using more advanced EHR features if allowed to develop their skills under a training plan that is receptive to the users’ skill level.

In addition to being mindful of users’ skill level, it is also important to ensure that training is not something people will dread and that they will have input into the training curriculum.

An article published in Modern Healthcare offers an excellent case study of an approach to training that embraces a forward-thinking approach to EHR training focusing on user involvement. In 2017, when Vanderbilt University Medical Center's health system embarked on the process of converting over to a new electronic health record system, the organization sought to reduce implementation-related reductions in revenue by investing heavily in a user-centered training plan.

Vanderbilt directly involved 1,000 employees in preparing and organizing department-level training and providing insight into how the organization should focus its ongoing training efforts after the go-live period. In addition to involving users in developing training, they were also offered informal familiarization sessions which were coupled with formal training. Employees were encouraged to familiarize themselves with the new system at interactive events called "space stations."

Given the high rates of EHR, people’s use of the new system is likely less of an adoption issue, but rather a buy-in issue. In this sense an organization must be able to make the case to its staff that an EHR is not simply a product of regulatory compliance, it is a tool that, when used properly, can enable organizations to deliver higher quality care more efficiently.

The Future of Healthcare Survey conducted by the Doctors Company, a medical practice insurance organization, surveyed over 3,400 physicians on a number of topics related to attitudes concerning their profession. A series of questions focused on physician attitudes toward their EHR. Some of the findings in this area indicated that 54 percent of physicians believe EHRs have had a negative impact on the physician-patient relationship. 61 percent of physicians believe EHRs are having a negative impact on their workflow, with many suggesting that EHR requirements are a major cause of burnout. Given that most physicians display negative attitudes toward EHR use in general, one should view clinical staff buy-in as an important challenge to EHR implementation.

In light of the fact that among most clinicians have negative perceptions of EHR technology, how can an organization encourage clinician buy-in? One of the most effective strategies to encourage clinician buy-in involves providing clinicians a meaningful opportunity to provide input in selecting the EHR, designing EHR workflows and planning the implementation process. With a voice in an organization’s EHR strategy, clinicians not only offer valuable insight but also can take ownership of how a practice uses technology, which may foster buy-in.

Sharing clinical data within an organization and with outside providers is vital to delivering care in an efficient manner.  Despite government regulations and incentives to encourage greater interoperability, 10 years after the passage of the HITECH - data sharing remains a serious challenge.

The scope of the problem is illustrated in data collected by The Office of the National Coordinator for Health Information Technology who, in a large scale survey of patients, found that of 32 percent of individuals who went to a doctor in the past 12 months reported experiencing a gap in information exchange. Roughly 1 in 5 of these individuals had to bring prior test results to an appointment. Slightly less than 1 in 10 of these individuals had to redo a test or procedure because their prior data was unavailable.

Poor performance, with regard to interoperability, not only presents issues regarding clinical performance - but it also can negatively impact patient satisfaction. According to a recent survey from Black Book, healthcare organizations who perform better at sharing patient health data often deliver a more positive patient experience.

Given the importance of seamless data sharing, how can an organization overcome these challenges? Firstly, an EHR should be selected based on interoperability. If full interoperability is not possible, then the next logical step would involve finding ways to make data sharing more seamless through third-party add-ons or other technology solutions.

Medscape, a medical research database company, published a study which surveyed 1423 healthcare providers, including 847 physicians and 1103 patients, looking at their attitudes toward healthcare technology. The results suggest that patients surveyed have a positive attitude regarding the use of technology in managing care. An overwhelming majority of patients, four out of every five, believe that EHRs help physicians and their staff work more efficiently.  But, these patients also indicate that patient-centered technology such as patient portals are used only by a small percentage of patients. Patient portals have achieved a high degree of penetrance into clinical practice, with nearly three-quarters of physicians reporting their integration at their main practice site. However, despite this high penetrance, a majority of physicians (53 percent) reported that they rarely used this technology to communicate with patients. Patients reported lower availability of patient portals than physicians; however, they were significantly more likely to report using them. Just 13 percent of patients reported "never using" a patient portal; nearly half reported using a patient portal at least occasionally, and nearly 20 percent reported using one "almost always" or "always."

As stated, earlier, buy-in is important in order for an EHR implementation to be successful.  If clinicians are reluctant to buy-in to an EHR project this may have other consequences including reductions in patient satisfaction with the EHR.  A study in the Journal of the American Medical Informatics Association found that physicians who were unhappy with an EHR system could pass that sentiment on to their patients. The researchers examined the relationship between physician attitudes toward their EHR system and patient satisfaction. The study concluded that the dissatisfaction of providers with an EHR may negatively impact patient satisfaction. 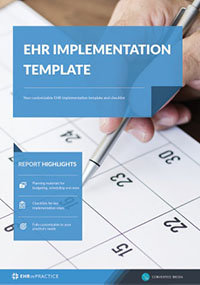