The cloud-based versus on-premises EHR debate has lingered in the background of the EHR industry for as long as vendors began to offer viable cloud-based EHR products. As cloud-based EHRs moved beyond upstart status to carving out a sizable chunk of the EHR market, serious questions began to emerge as to the comparative benefits and disadvantages of each.

The narrative in the market holds that the cloud is the future and that server–based systems which are portrayed (accurately or not) as the method of storage rooted in the past. Among segments of the healthcare market cloud-based EHRs are developing an enthusiastic following.

A survey conducted by market research company Black Book, based on data collected from 5,700 small practices, supports this. The survey found that 83% of practices had named cloud-based EHR systems as the most momentous business decisions they had made over the past several years. Evidence shows that cloud-based EHRs are becoming the platform of choice for practices, so let’s have a look at the scorecard between cloud and on-premises EHRs

One of the main value propositions of cloud EHR systems in the market has been their lower cost when compared to on-premise products. Since cloud-based EHRs do not require capital investment in hardware, software, and network personnel, they are cheaper to implement and operate. According to the Black Book survey, “cloud-based EHRs are quickly becoming the go-to option for providers that want to maximize functionality without compromising their budgets.”

GET EHR RESEARCH & KNOWLEDGE RIGHT TO YOUR INBOX

One of the long-standing criticisms of cloud EHRs is that they are less reliable, since these platforms rely on a connection to a third party server. However, for practices who have a reliable high-speed connection, this has become less of an issue. The Black Book survey found adoption of cloud-based EHRs in smaller urban practices has increased from 60% in 2013 to 82% in 2015 while implementation among rural providers has stayed steady at 20%. This disparity in adoption rests on gaps in broadband reliability between urban and non-urban providers.

In addition to connectivity concerns on the provider side, the cloud service itself must also be available. Most services offering cloud based services strive to achieve at least 99.95% availability or roughly 4.38 hours. According to Networkworld.com downtime across major cloud service providers ranged from 2 hours to 17 hours.

For on-premise EHRs, the question of average downtime becomes a bit murky, as there are a variety of hardware and software configurations available on the server market. Data collected to measure the economic impact of downtime reveals that across all industries including healthcare the average reported unplanned downtime was 86 minutes. suggesting that on-premises systems experience less unplanned downtime than cloud-based ones.

What we can conclude

From the information presented above, the debate over cloud EHR and on-premises EHR appears to have no concrete answer. It is important to note that security also factors heavily in which type of system practices choose to adopt, with at least anecdotal evidence showing that cloud based platforms are less secure because data simply is more portable and thus more exposed to risk. However, there is little quantifiable evidence to support this in the healthcare setting. As such, the choice between cloud and on-premises remains dependent on the circumstances of each practice. 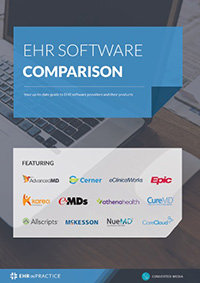