The relationship between EHRs and their physician users is a testy relationship at best. On the whole, the concept of modernizing medical practices is not something most physicians are opposed to, rather the lack of buy-in to the idea of using EHRs as a foundation medical practice is based on what can be best described as physicians fears that the traditional manner of caring for patients is being compromised to meet regulatory mandates. Further compounding this resistance is the fact that physicians’ workflows are often shoehorned into technology implementations that do not consider physician end users.

Released in October 2018, the Future of Healthcare Survey conducted by the Doctors Company, a medical practice insurance organization, surveyed over 3,400 physicians on some topics related to attitudes concerning their profession. A series of questions focused on physician attitudes toward their EHR. Some of the findings in this area indicated that 54 percent of physicians believe EHRs have hurt the physician-patient relationship, with a further 61 percent of physicians believing that EHRs are hurting their workflow, with many suggesting that EHR requirements are a major cause of burnout.

Before discussing why buy-in matters it is important to look at what buy-in entails. Buy-in describes a mindset whereby an individual believes in or believes they have a vested interest in a particular goal or strategy. In the context of physician buy-in, one can state that buy-in represents a set of attitudes representative of an individual who believes an organization’s strategy with regard to EHR technology is beneficial to their job performance and overall organizational performance.  Accordingly, buy-in matters from a human resources perspective but also from a clinical standpoint as well.

Given that most physicians display negative attitudes toward EHR, achieving physician buy-in for your practice’s EHR can present challenges. The following tips offer three ways your organization can create physician buy-in.

At the beginning of the implementation process when goals are being set for a practice’s EHR, physicians should be included in the goal-setting process in order to provide insight into short term and long term goals regarding how a practice will use its EHR.

2. Meaningful involvement in the selection process

Physicians should be involved in the selection process from the start according to numerous studies examining EHR implementation outcomes. These studies point to the importance of obtaining input from clinicians during the planning and selection process due to their position on the front lines of providing clinical services these physicians are vital to a successful selection process by providing input into the design and workflow processes.

Physicians should be allowed to provide input into how the interfaces in a practice’s EHRs are set up. For example, physicians can use tools such as customized templates and landing pages, to make their EHR experience easier.

The perception among most physicians is that EHR technology is negative, therefore it is especially important for an organization to encourage clinician buy-in. The most effective strategy to encourage clinician buy-in is to involve clinicians and provide them with a meaningful opportunity to give input in selecting the EHR, designing EHR workflows and planning the implementation process. With a voice in an organization’s EHR strategy, clinicians not only offer valuable insight but also can take ownership of how a practice uses technology, which may foster buy-in. 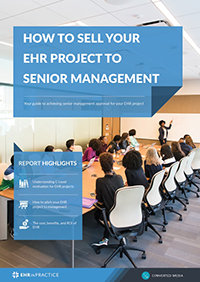 How to sell your EHR project to senior management